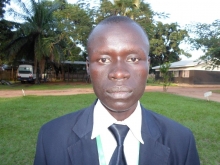 YEI TEACHER TRAINING COLLEGE, I would like to say, is a very special place for the people of South Sudan and to me in particular. Indeed to me, I can say, is the turning point in my life in the following ways:

Y.T.T.C is a real academic ground, given the quality of its qualified and committed tutors who have kept performance at its highest level. I have benefited from this very much because I am able to weigh my strengths now and how I was. I have seriously improved and very sure of doing even much better now, in high levels of studies. Thank you Principal and the entire staff for academic excellence in this college.

Some students, I can say, might have not felt the love of their parents since they were born, probably because they had been separated due to the effects of the war that has dominated the history of this nation, SOUTH SUDAN; and on joining Y.T.T.C, they came to experience parental love from the fact that they are formed into families under the mentorship of a tutor, who takes the responsibility of a father or mother. This has influenced our lives so much that for me as an individual cannot measure the LOVE and CARE my own MENTOR, who is now a true mother; Mama JULIET DRIJARU ZILLY showed for me. I want to say that if today two to three people are admiring my life, it costed her a lot, though I still have my parents whose struggle is also paramount and placed me on the hands of MAMA here, in the COLLEGE. Hence, the mentorship of our dear TUTORS and the commendable leadership of our dear Principal Mr. KEPO JAMES and all his subordinates has changed the lives of the students positively.

It is very free for any student to exercise his or her political aspirations because the college administration and its entire staff does not take any concern about elections for student leaders except the ELECTORAL COMMISSION, which is granted all the authorities and independence in executing its duties until it is accomplished. This has truly portrayed to us, how elections should be conducted.

Another thing related to this is that simplicity and commitment are the centre of success to any political position in the students’ leadership as imitated from the Principal of the college and its entire staff. It has become a practice for the students and considered as one of the major qualities required for the position of the Guild Presidency in particular. I became at one point connected to that which explains why I was lucky to have led the college as its Guild President from 2013-2014.

I wouldn’t like to talk about my own leadership because I cannot see my own person but rather, another person sees better though I can touch a few of those things that I have felt myself.

First of all, on my joining Y.T.T.C,   I had no interest to do any single responsibility at all because I just wanted to settle academically, having known the motto of the college as “STRIVE FOR EXCELLENCE” but it just came as a dream because I found myself being pushed to stand for the Guild Presidency by both my elders; the then second year students and my own class mates, who gave me the encouragement to stand. That gave me a task of serious prayer until one evening I said, “God, may your will be done; not my own”,  then I filled the application form which my elders took to the office themselves

The story is long;

However, what should be noted with great concern is that,

My government started being admired from the first week when I started my term of office as the President of the week and swept, dug, washed the toilets with my ministers which gave an example that the rest of the Ministers kept until the term ended on 27-7-2014, hence earning good reputation for my government.

Solving Disciplinary cases brought maximum discipline among students. Humility and loyalty to all my superiors also characterized my government taking it to the rank of; “The best government ever”, in the College.

I have not attributed this to ourselves in the government but to God who is the fountain of every good thing. May his name be praised? Amen.

I wish all the members of the out- gone guild government and the in- coming ones, a very prosperous new year. Don’t forget your roots, but let us look back to the college and contribute to its growth in one way or the other, according to our capabilities.

LONG LIVE THE PRINCIPAL KEPO JAMES, THE DEPUTIES, DEAN OF STUDENTS, AND ALL STAFF.

back to top
Former guild Presidents