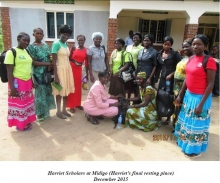 The Harriet Memorial Fund (HMF) was established in honour of The Late Harriet Jiraba, who died tragically in a road accident in 2010. The aim of the Fund is to provide needy women with financial support to be trained as primary school teachers and nurses. The Fund began by training teachers at Yei Teacher Training College in 2011, and it is hoped that more money will be raised to train nurses. Harriet was herself a nurse, but married to a teacher and resided in the staff quarters with her family where she became a mother and a role model too. This is the basis of establishing the scholarship and getting the first beneficiaries at Yei Teacher Training College (YTTC) where her impact was felt most.
Harriet had a passion for change in her community, especially among women and children. She cared deeply about South Sudanese girls who were unable to pursue education beyond secondary school – so this Fund fulfils her passion that more girls are trained to become teachers and nurses who make a difference to their communities.
HMF began by sponsoring South Sudanese women who had already been admitted to YTTC in 2011. One criterion was for the scholar to show commitment to the College and the teaching profession in various ways. All scholars are considered after being highly recommended by their College mentors, not just for their academic success and character, but also for their commitment to bring a change to their communities after completing from YTTC.
The scholarship includes the cost of tuition and accommodation at YTTC as well as a contribution towards the costs of travel, School Practice (SP) and some pocket money each term. YTTC has three terms in a year.

back to top
Home